Canadian Prime Minister Justin Trudeau is in Paris along with dozens of other world leaders to mark 100 years since the end of the First World War — attending a peace forum after a ceremony this morning led by French President Emmanuel Macron amid grey and damp weather, which seemed fitting when remembering a war fought in mud and relentless horror.

German Chancellor Angela Merkel made an impassioned plea for world peace at the forum, saying “we must not simply stand by and watch” as more conflicts continue to unfold around the world.

Merkel and Macron launched a three-day peace forum aimed at encouraging multilateralism, using their countries’ reconciliation as a global example.

She denounced the “national vaingloriousness and military arrogance” that led to the “senseless bloodshed” of two world wars.

In a veiled dig at U.S. Donald Trump’s America-first policies and skepticism toward multilateral co-operation, Merkel warned that “lack of communication and unwillingness to compromise” can have deadly consequences.

Macron opened the forum by saying the world’s stability is threatened by nationalism, racism, anti-Semitism and extremism as well as by economic, environmental and refugee challenges.

In a speech inaugurating the conference, which followed the ceremony, Macron said “what is important for the future is the way this image will be interpreted,” as the “symbol of durable peace between nations” or as “a picture of a last moment of unity before the world goes down in new disorder.”

“It depends only on us,” he added.

The Paris Peace Forum aims at promoting concrete actions toward peace and should be repeated every year, he said.

More than 70 world leaders with the power to make war but a duty to preserve the peace are in Paris, the epicentre of global commemorations that drove home a powerful message: Never again.

Before the forum began, the heads of state and government gathered — silent, sombre and reflective — for a ceremony under the Arc de Triomphe at the Tomb of the Unknown Soldier, the mute and powerful symbol of sacrifice to the millions who died from 1914-18.

The traces of this war never went away. The old demons are rising again. We must reaffirm before our peoples our true and huge responsibility.– Emmanuel Macron, France’s president

With cellist Yo Yo Ma and the European Union’s youth orchestra performing, the leaders heard high school students recalling the joy felt by soldiers and civilians alike when the fighting finally stopped at 11 a.m. on Nov. 11, 1918.

“I only hope the soldiers who died for this cause are looking down upon the world today,” American soldier Capt. Charles S. Normington wrote on Nov. 11, 1918, in one of the letters read aloud by the students. “The whole world owes this moment of real joy to the heroes who are not here to help enjoy it.”

Macron also spoke at the morning ceremony, warning about the fragility of peace and the dangers of nationalism. 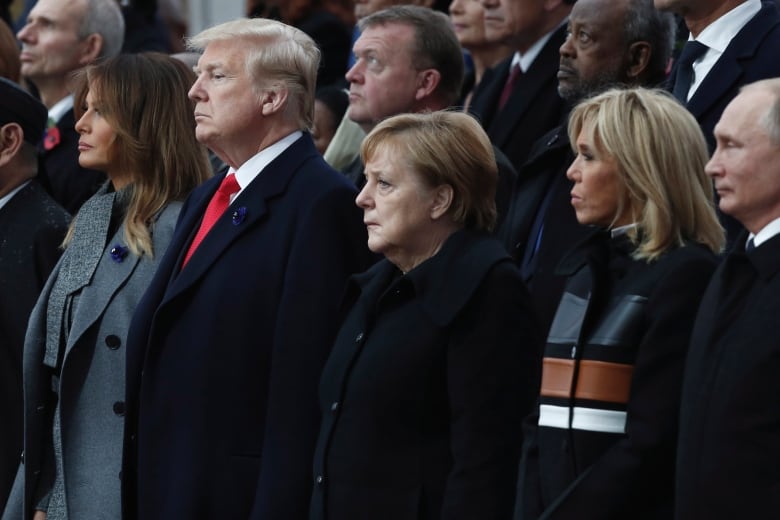 “The traces of this war never went away,” Macron said. “The old demons are rising again. We must reaffirm before our peoples our true and huge responsibility.”

Macron also said: “Patriotism is the exact opposite of nationalism. Nationalism is a betrayal of patriotism. In saying, ‘Our interests first, whatever happens to the others,’ you erase the most precious thing a nation can have, that which makes it live, that which causes it to be great and that which is most important: Its moral values.”

Trump, who champions a policy of ‘America first’ and has said he is proud to be a nationalist, snubbed the event. Air Force One departed Paris for Washington shortly after the peace forum opened. 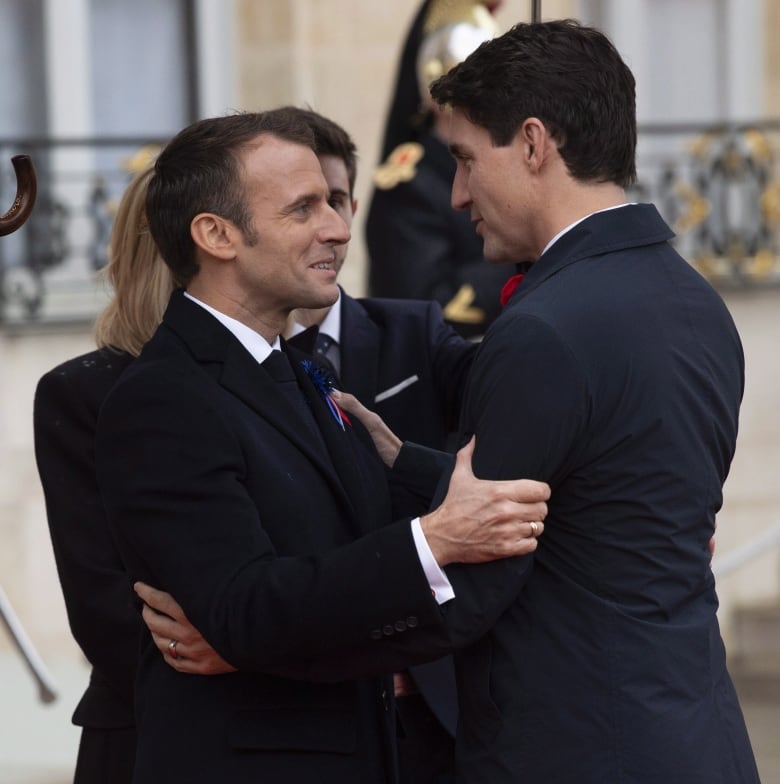 The commemorations started late, overshooting the centenary of the exact moment when, 100 years earlier at 11 a.m., the eerie silence of peace replaced the thunder of guns in western France.

Under a sea of black umbrellas, a line of leaders led by Macron and his wife, Brigitte, marched in silence on the cobbles of the Champs-Élysées, after dismounting from their buses.

Trump arrived separately, in a motorcade that drove past two topless female protesters with anti-war slogans on their chests who somehow got through the rows of security and were quickly bundled away by police. The Femen group claimed responsibility.

Last to arrive was Russian President Vladimir Putin. Merkel was positioned in pride of place between Trump and Macron, a powerful symbol of victors and vanquished now standing together, shoulder to shoulder. Overhead, fighter jets ripped through the sky, trailing red, white and blue smoke.

The geographical spread of the leaders in attendance showed how the “war to end all wars” left few corners of the Earth untouched but, little more than two decades later, was followed so quickly and catastrophically by the even deadlier Second World War.

Macron, Trudeau and other leaders came to Paris hoping to use the 100th anniversary of the end of the First World War to renew calls to quash festering tensions across the globe.

“There is a general sense and desire among many countries, including Canada, to do whatever is possible to sustain the institutions of the international order and practical, multilateral co-operation. And so you see that in Canada, you see that in Germany,” said Roland Paris, Trudeau’s former foreign adviser.

Trudeau, who is on a 10-day trip across Europe and Asia, will come face to face with leaders of nations sowing some of that tension: Trump, Putin and Chinese President Xi Jinping.

Trudeau spoke with Trump at a dinner Macron organized on Friday night, although government officials wouldn’t say the exact topic of conversation. Trudeau will also attend summits this week in Asia that Putin and Xi are scheduled to attend.

Putin and Trudeau sat together for the opening of the forum: 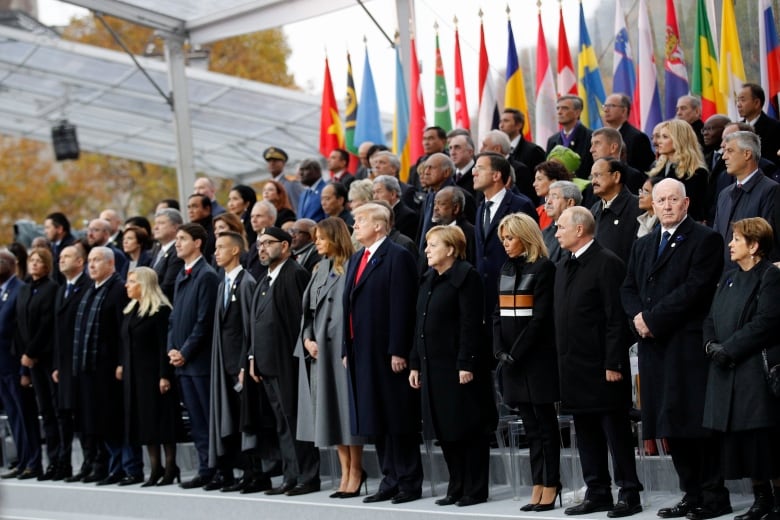 Dozens of heads of states and world leaders took part in the solemn ceremony at the Tomb of the Unknown Soldier. (The Associated Press)

U.S. National Security Adviser John Bolton had said at one point that Trump would meet with Putin during the forum. But Trump later said
he would instead sit down with him formally later this month at a world leaders’ summit in Buenos Aires.

Putin was quoted by the state-funded Russian broadcaster RT saying they didn’t end up meeting because they didn’t want to “interrupt the schedule.”

For his part, Pope Francis said from Italy that the First World War should serve as a severe warning to reject a “culture of war.”

But Francis observed that the war’s lessons have been ignored, saying “it seems we never learn” as he addressed faithful in Vatican City’s St. Peter’s Square on Sunday. 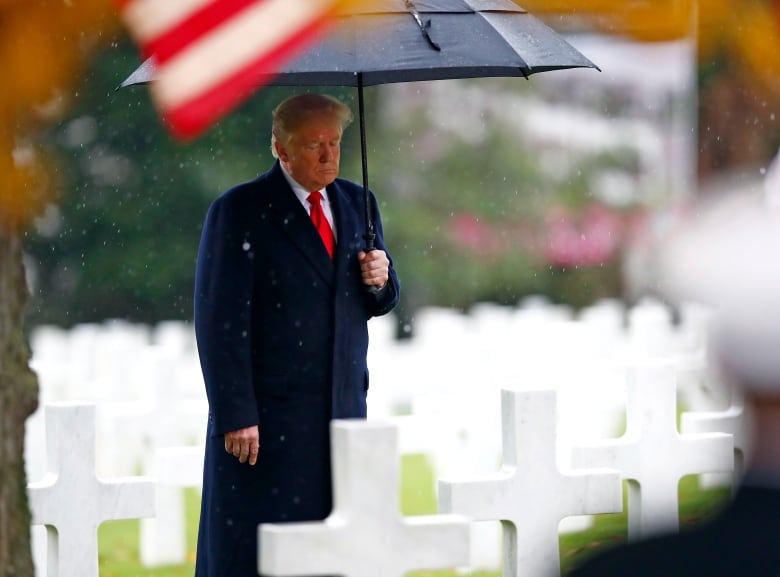 The Pope, who often decries the arms industry, added: “Let’s invest in peace, not war!”

Dignitaries and guests at the official ceremony in Paris weren’t the only ones honouring the fallen. On the streets, people from around the world said it was important to honour their sacrifices.

Christopher Federico, a Toronto school teacher, said he was a lieutenant-colonel in the Canadian army reserve and “as a soldier and a veteran, to be able to remember all the soldiers who died in World War I and since, it’s obviously very important to me personally and to us as a country.”

Paul Thomson of Guelph, Ont., said he was in Belgium to visit the grave of his great-uncle, who was killed in the First World War, so went to Paris as well.

“It’s a good opportunity to look back at what actually happened 100 years ago and how many people actually died in some pretty grave circumstances,” said Thomson. 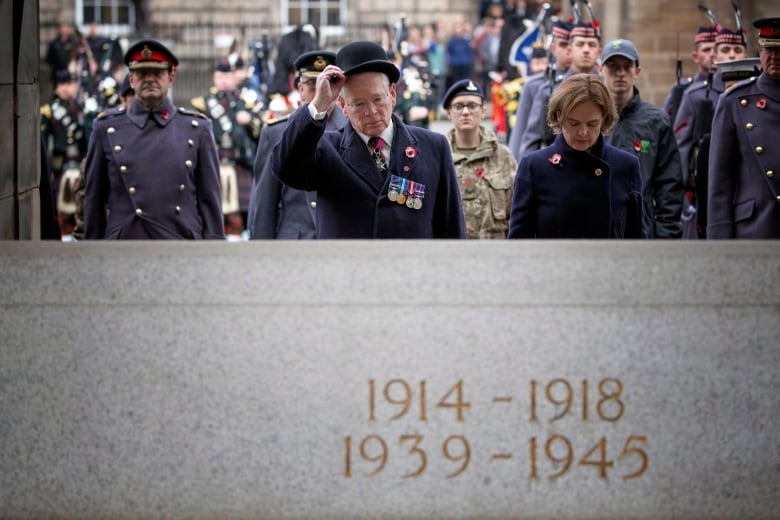 Veterans and members of the armed forces community attend a ceremony at the City Chambers in Edinburgh on Sunday. (The Associated Press)

On the other side of the globe, Australia and New Zealand held ceremonies to recall how the war killed and wounded soldiers and civilians in unprecedented numbers and in gruesome new, mechanized ways.

Those countries lost tens of thousands of soldiers far away in Europe and, most memorably in the brutal 1915 battle of Gallipoli, in Turkey.

In London, Queen Elizabeth, dressed in black, watched from a balcony in central London as her son Prince Charles laid a wreath on her behalf at the foot of the Cenotaph, a memorial honouring the fallen. The solemn act marked by two minutes of silence was repeated in dozens of towns, cities and villages throughout Britain. Prince William and Prince Harry were among Royal Family members who also laid wreaths. Canada’s national ceremony will be held in Ottawa.

In Scotland, veterans and members of the armed forces community attended a ceremony at the City Chambers in Edinburgh.

Kareen Rispal, France’s ambassador to Canada, says Trudeau’s appearance at the ceremony in Paris is a reminder of Canada’s contributions during the First World War that aren’t always recognized.

Some 650,000 Canadians served in the First World War, and more than 66,000 of them lost their lives. About 172,000 more were injured. Others served behind the front lines, working with locals to aid the war effort.

“We as French, we as Europeans — I think we don’t value enough the effort made by the Canadians,” Rispal said.

With files from CBC’s Janyce McGregor