Canadian fisheries scientists have discovered a large number of intact colonies of living coral off Cape Breton in a reef complex that had been turned to rubble by decades of bottom trawl fishing gear.

It’s the first sign a recovery may be underway in the Lophelia coral conservation area — a 15-square-kilometre zone closed to fishing 14 years ago.

“I was very excited because I knew it was something we had not observed before,” said Lindsay Beazley, a biologist with Fisheries and Oceans Canada.

The white- or pink-coloured Lophelia pertusa — known as spider hazards — is the only reef-building species known in Canada.

The only Lophelia reef complex is less than one kilometre square at a depth of 320 metres, 280 kilometres southeast of Louisbourg at the slope edge of the Scotian Shelf. The reef was damaged extensively by bottom trawling for redfish in the 1980s and 1990s. That fishery involves dragging a weighted net along the ocean floor.

How they found it

Beazley was part of a 16-member team on board the coast guard science ship Hudson collecting video and photographs of the seabed along the Scotian Shelf slope earlier this year.

They were looking for signs of Lophelia recovery inside the conservation area. Since 2004, four previous surveys had found little evidence of a comeback.

That changed in late June when Beazley directed the ship to an area inside the conservation zone not surveyed before. 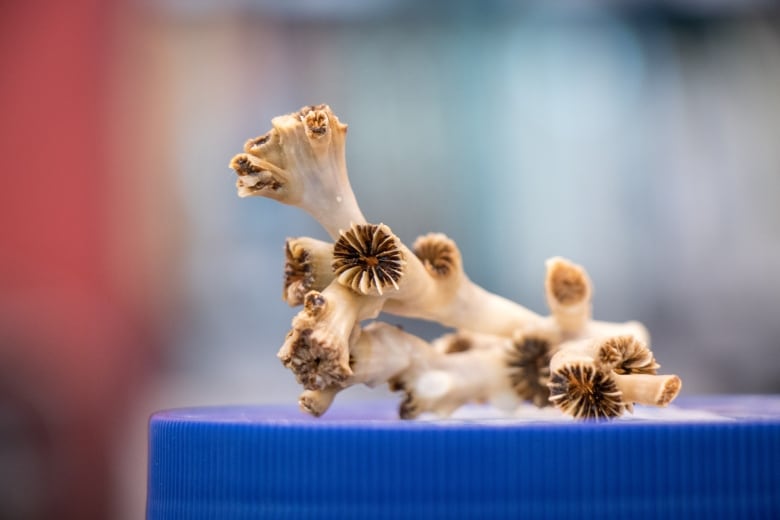 Lophelia pertusa is the only reef-building coral found in Canada. (Robert Short/CBC)

“We came across this large matrix of Lophelia. It was mostly dead but there were many live colonies on top of the dead rubble. It also had a large diversity of other live corals,” said Beazley.

Not only had scientists never seen that many live mounds, but it appeared it had reached several metres from the ocean floor.

“It’s very tall considering most of the live mounds that we see are only a few centimetres off the seabed.”

In water 280 kilometres southeast of Cape Breton, scientists have discovered intact colonies of living coral. It’s the first sign that a recovery may be underway in a reef complex extensively damaged by fishing gear. 1:32

Scientists intend to measure the height and age of the reef mound.

It could be as high as 10 metres and very old — given that Lophelia in the northeast Atlantic off Norway grows at a rate of two centimetres a year.

They also want to know the environmental conditions at the reef site — like temperature, salinity and currents — which could point to other areas off Nova Scotia where Lophelia exists.

Corals enhance the diversity of commercially important fish species and invertebrates. They also act as habitat for other animals to settle upon. DFO has said it may take decades for the Lophelia to recover.

Beazley said no new young Lophelia — or recruits — have been seen among the rubble. It’s not known whether other animals had moved in to occupy the bottom or if environmental conditions have changed.

The far right of this DFO map shows the coral conservation area off the coast of Cape Breton. (Submitted by DFO)

“But I think the discovery that we made on the cruise this year is a very exciting one. We saw many more live mounds of Lophelia which gives us hope it will once again reach a large expanse of reef.”

“It shows a high number of live coral mounds, some of which may have recruited since the fishery closure,” she said.

2018-10-27
Previous Post: The birth of the National Post and ‘the impending newspaper war’
Next Post: Eduardo Rodriguez gets nod for Red Sox in Game 4 of World Series