Cardiologist Bill Devlin had examined people before, but he was once nervous about a new patient.

“His name was Sunshine, and he was 535 pounds,” Devlin told The St. John’s Morning Show this week.

Luckily for Devlin, Sunshine — one of the biggest gorillas on record — was asleep, and the doctor was able to complete the exam.

“Sunshine, fortunately, had a good heart, and we were able to evaluate that as part of his general physical exam,” he said.

It was very unnerving, because you get to see the power and the physical strength that they have.– Bill Devlin

“Since then, I’ve met him a number of times in the awake state. I don’t think he remembers anything about it.”

Devlin — born, raised and educated in St. John’s — practises ​at the William Beaumont Hospital School of Medicine near Detroit, where a partner became involved with the Great Ape Heart Project after it was discovered that great apes in captivity were dying of cardiac disease.

Devlin decided he could help too.

“The veterinarian world doesn’t have much experience with primate hearts, so they reached out to the human world. We have lots of experience,” said Devlin, in town for his 30th-year class reunion.

Sunshine was sedated when Dr. Bill Devlin examined him. (Submitted by Bill Devlin)

An average person looking at a human heart and a gorilla heart wouldn’t be able to tell the difference, he said.

The first time he was called to a zoo, to examine two gorillas — including Sunshine — was nerve-racking. They were anesthetized so echocardiograms could be done to assess their hearts.

“There was a lot of unknowns,” Devlin said, adding that they rely on the veterinarians and zookeepers for help in determining how the apes are feeling. 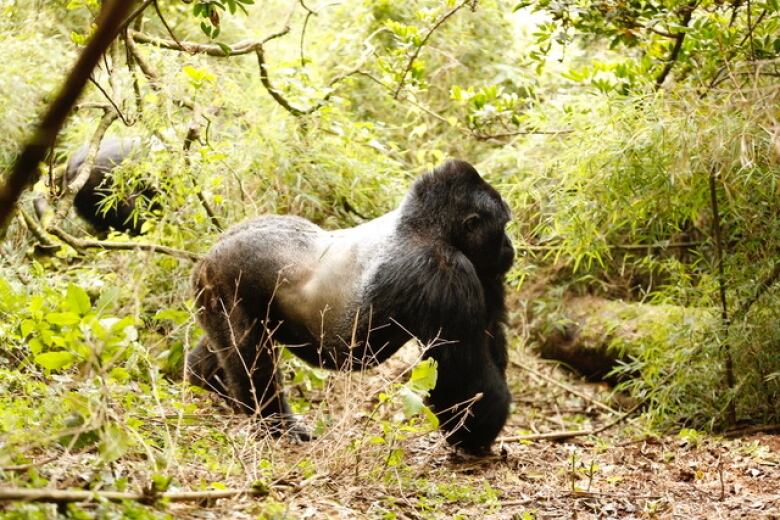 Devlin says he finds satisfaction in helping animals, like this mountain gorilla in Rwanda, because of everything they’ve done to help humanity. (Submitted by Bill Devlin)

“They know by the way the animal moves or the way they eat their food whether they’re having a good day or a bad day,” he said. “I ask my patients how they feel, and you can’t do that with these, but the veterinarian world is used to that.”

A house call to a gorilla enclosure at Disneyworld taught Devlin that lesson.

“The gorillas were really disturbed when I came into the enclosure, and one of the keepers said it’s because I was so tall, and I was taller than they were, and they didn’t like the fact that they had to look up,” he said. “So I kind of stooped. You learn how to behave in their world.”

When the gorilla wakes up

And not all patients slept as soundly as Sunshine did. Devlin recounted doing exams at a Chicago zoo when one of the gorillas woke up.

“There was a mad scramble to get her back in her cage before she really came to,” he said. “That was very unnerving, because you get to see the power and the physical strength that they have.”

Devlin volunteers for the project because, he said, it’s a way to repay animals for all the ways they’ve served humanity.

“We test on animals and we do things. This is a scenario where we’re actually using human experience to help them,” he said. “And that’s what I really find that’s neat. We treat the animals that have heart failure just the same way that we would treat a human patient … It’s just an amazing situation to be able to use the skills I’ve developed as a human cardiologist to help animals.”