This morning the U.S. Secret Service confirmed that it has intercepted explosive devices sent through the mail to the homes of Hillary Clinton and former President Barack Obama, while the bomb squad in New York City has evacuated CNN’s offices over another suspicious package.

New York Police guard the Time Warner Center in New York on Wednesday after a police bomb squad was sent to investigate a suspicious package sent to CNN’s offices there. (Kevin Hagen/Associated Press)

All three mailings are said to be similar to a parcel that was found in the mailbox at the estate of billionaire activist George Soros on Monday, described by law enforcement sources as a 15 centimetre length of pipe filled with explosive powder.

In the case of the device discovered near Bill and Hillary Clinton’s home in Chappaqua, NY, the Associated Press reports that the package bore the return address of U.S. Rep. Deborah Wasserman Schultz, a surely ironic reference to the controversial former chairwoman of the Democratic Party. (There are reports that her Florida office has also been evacuated, as well as the building in San Diego, Calif., that Sen. Kamala Harris, also a Democrat, works out of. )

The box found in CNN’s mailroom was addressed to former CIA Director John Brennan, a frequent critic of Donald Trump, who saw his national security clearance revoked by the U.S. president this past August. 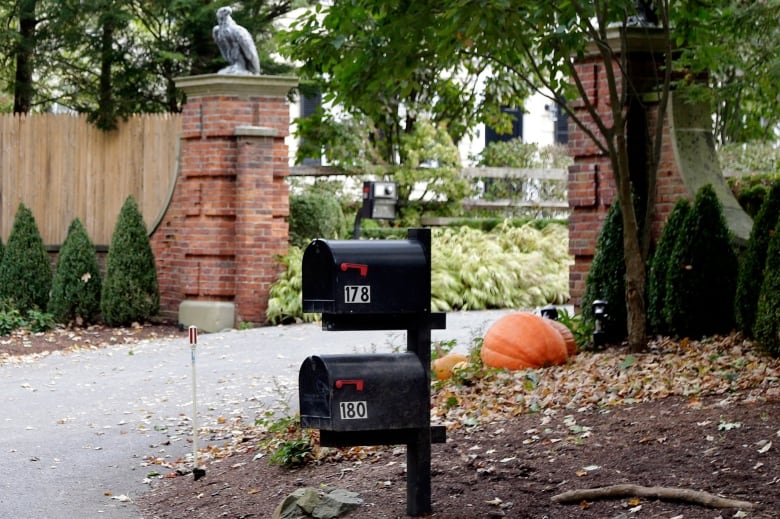 Mailboxes outside the entrance to a house owned by philanthropist George Soros in Katonah, N.Y., on Tuesday. A device found outside the compound ‘had the components’ of a bomb, including explosive powder, a law enforcement official said. (Seth Wenig/Associated Press)

It’s not yet clear who is behind the bombs, or their maker’s exact motivations, but White House spokesperson Sarah Sanders and Vice President Mike Pence have both condemned the “cowardly” acts.

There has been a notable uptick in politically linked plots and threats as the midterm elections approach and the campaign rhetoric intensifies.

Last week, terrorism investigators with the Federal Bureau of Investigation announced an indictment against a Utah man who had mailed ricin threats to President Donald Trump, Secretary of Defense James Mattis and three other high-ranking government officials. They also secured a guilty plea from a Boston man who had sent letters containing a suspicious white powder to Donald Trump Jr., his estranged wife Vanessa Trump, and three other public figures. 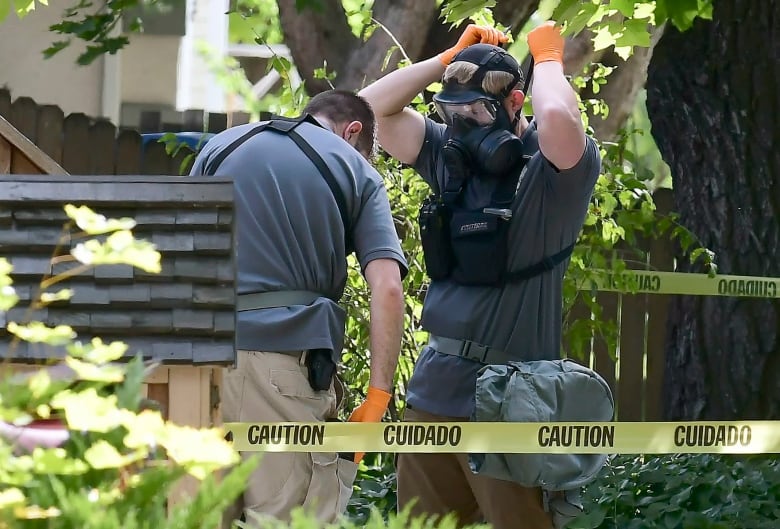 Law enforcement officers search a house in Logan, Utah, on Oct. 3 where William Clyde Allen III, a man suspected of mailing ricin to the Pentagon and President Donald Trump, was taken into custody. (Eli Lucero/Associated Press)

And the week before, the FBI charged a New York man over an alleged plot to detonate a 91 kilogram bomb on the National Mall in Washington, D.C., on Nov. 6 — election day — with the intent of killing himself and many others. The goal, police say, was to draw attention to the suspect’s belief in “sortition,” an ideology that calls for the use of random selection to fill political positions.

So far in 2018, the FBI has dealt with eight different bomb-making cases and plots that it classifies as domestic terrorism. Some involved fringe political groups, like a Florida Neo-Nazi movement that was plotting to blow up government infrastructure.

Others were driven by revenge, like a Brooklyn man’s attempts to blow up several police officers who had arrested him back in 2014. It resulted in the inadvertent killing of a 73-year-old landlord in Queens when the device was delivered to the wrong address.

One plot had financial motives — a bid by a convicted Florida sex offender to build 10 bombs and set them off at Target stores so he could buy the company’s stock on the cheap. 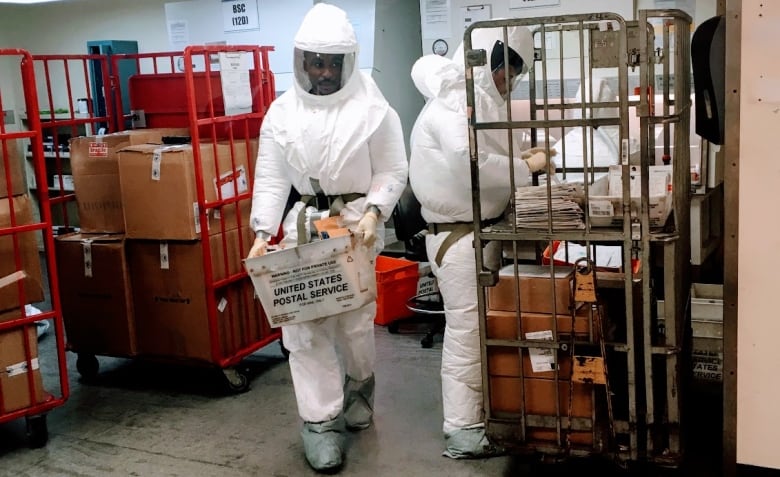 U.S. Defense Department personnel, wearing protective suits, screen mail as it arrives at a government facility near the Pentagon in Washington, D.C., on Oct. 2. Packages delivered to the Pentagon that week were suspected to contain the deadly poison ricin. Produced by processing castor beans, ricin is lethal in minute doses if swallowed, inhaled or injected, and it is 6,000 times more potent than cyanide, with no known antidote. (Thomas Watkins/AFP/Getty Images)

Another, involving U.S. Army soldier who set off an improvised chemical weapon in a Louisiana forest and exposed two investigators to chlorine gas, has never really been explained.

Over the past six months, the FBI has also handled three cases where U.S. citizens have made their own ricin — a deadly poison derived from castor beans.

In the second, a 63-year-old South Carolina woman was keeping a syringe full of the chemical agent in a storage unit along with a bunch of firearms.

The last involved a 21-year-old man from Little Rock, Ark., who accidentally poisoned himself while making ricin in his blender. He told investigators that he got the idea from watching Breaking Bad, and ordered the castor beans on Amazon.com.

Decree in the desert

Speaking this morning at the Future Investment Initiative conference in Riyadh, Mohammed bin Salman called the killing that took place inside Saudi Arabia’s consulate in Istanbul earlier this month, a “heinous crime that cannot be justified.”

And he promised to work with Turkey and other nations to find and punish the culprits.

“The incident that happened is very painful, for all Saudis,” said the prince. “Justice in the end will appear.”

Saudi Crown Prince, Mohammed bin Salman addresses the Future Investment Initiative conference in Riyadh, Saudi Arabia, on Wednesday. The summit, nicknamed ‘Davos in the desert,’ has been overshadowed by growing global outrage over the murder of a Saudi journalist inside the kingdom’s consulate in Istanbul. (Saudi Press Agency via AP)

The remarks came shortly after U.S. President Donald Trump finally voiced a suspicion that many people have held for three weeks — that MBS, as he is popularly known, had a hand in the murder of one of his fiercest critics.

“Well, the prince is running things over there more so at this stage. He’s running things, and so if anybody were going to be, it would be him,” Trump told reporters.

The investment conference, nicknamed Davos in the Desert, was supposed to be a celebration of MBS’ efforts to diversify the oil-dependent nation’s economy and his growing status as heir to the throne.

But worldwide outrage over Khashoggi’s death prompted many major corporations, including Google, Uber, Credit Suisse and HSBC, to cancel their plans to attend. Media partners like CNN, the Financial Times and the New York Times also pulled out.

Thousands of people did show up for the glitzy event, including the CEO of French oil giant Total, the vice-chairman of PepsiCo and the head of international development for Six Flags amusement parks.

However, the most notable attendee this morning was sitting onstage next to the crown prince — Lebanese Prime Minister Saad Hariri. 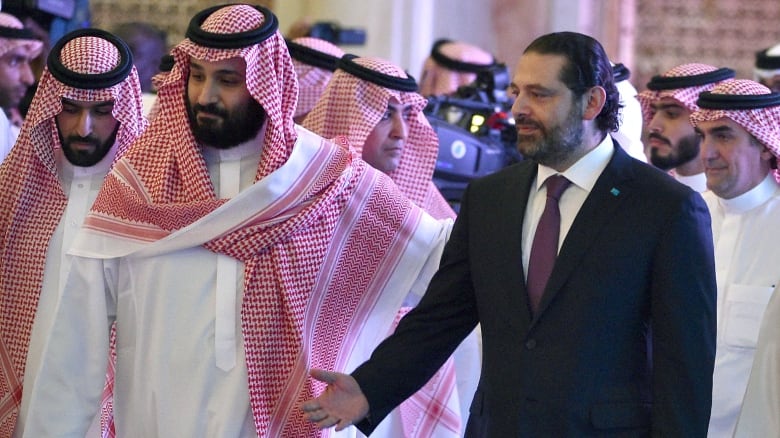 Just under a year ago,  Hariri was summoned to Riyadh to meet with the prince and ended up resigning his job live on Saudi television. He was returned to his position — and finally permitted to leave the country — a couple of weeks later after many diplomatic interventions.

Perhaps Hariri’s presence is an indication that all is forgiven.

Or maybe the prince is running short on friends.

A Japanese journalist held captive by Syrian militants for more than three years has been released.

Last night, government officials in Tokyo announced that Jumpei Yasuda, a freelance war correspondent who disappeared in June 2015, had been freed and was safe in the hands of authorities in neighbouring Turkey.

Jumpei Yasuda on Friday after his release in Hatay. The Japanese journalist was kidnapped in Syria more than three years ago. (Huseyin Bozok/AFP/Getty Images)

The 44-year-old had travelled to Syria to report on the fate of two other Japanese men, journalist Kenji Goto and security contractor Haruna Yukawa, who were both beheaded by their Islamic State captors near Raqqa in late January 2015.

Japanese officials said Yasuda’s release was secured with the assistance of Qatar’s government.

The al-Qaeda-linked group that was holding him, Hayat Tahrir al-Sham, formerly known as the al-Nusra Front, had been seeking a $10 million US ransom. But Japan has a long taken the stance that it will not pay to free its citizens, a policy that played into the deaths of Goto and Yukama.

Yasuda’s captors had sporadically released photos and videos of their hostage over the past three years. The most recent was in July when the journalist, dressed in an orange jumpsuit, was seen kneeling between two armed, masked men, pleading for his life.

That video caused a certain amount of confusion, since Yasuda, who held a sign written in Japanese, claimed to be a South Korean citizen named Umaru. A stylistically similar video of another foreigner missing in Syria, a 32-year-old Italian named Alessandro Sandrini, was posted on the same day, leading to speculation that they were being held together. 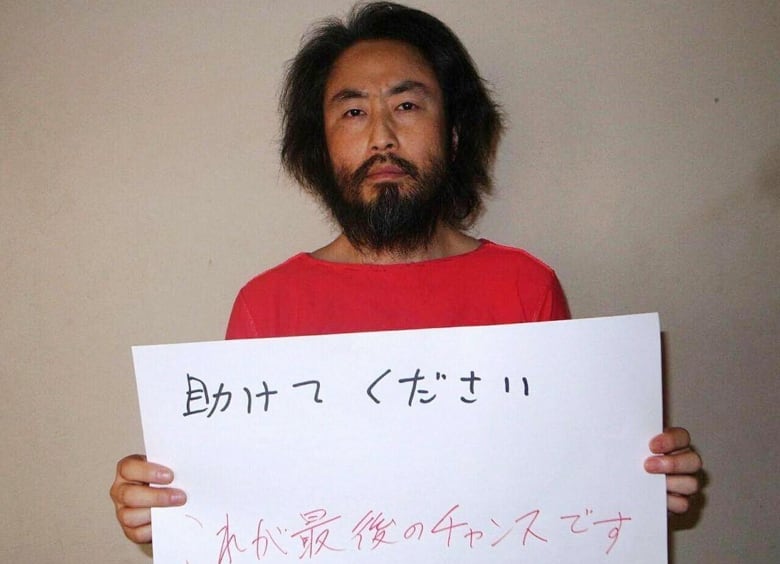 This undated picture provided by Japan’s Jiji Press news agency on May 30, 2016, and taken at an undisclosed location, shows kidnapped freelance journalist Jumpei Yasuda holding a piece of paper with a handwritten message in Japanese. (Jiji Press/AFP/Getty Images)

In early August, Yasuda’s wife — a pop singer who goes only by the name Myu — broke three years of silence with a Tokyo press conference, apologizing to the public for the “trouble” her husband had caused and pleading for his release.

“My message for the captors is that I want my husband back safely as soon as possible … I understand that the captors aren’t evil people at heart, but rather have been influenced by regional tensions,” she said.

Yasuda has been reporting from the Middle East since the early 2000s. In 2004, during his third trip to Iraq, he and three other Japanese citizens were briefly taken as hostages near Fallujah, but all were released unharmed within a day.

Reporters Without Borderslists six foreign journalists as still being held captive in Iraq, including American Austin Tice, Jordanian Bashar al-Kadumi and John Cantlie, a British national, all of whom went missing in 2012.

Twenty-two Syrian reporters and photojournalists are also believed to be hostages of various militant groups or the government.

Powering up with Lights. 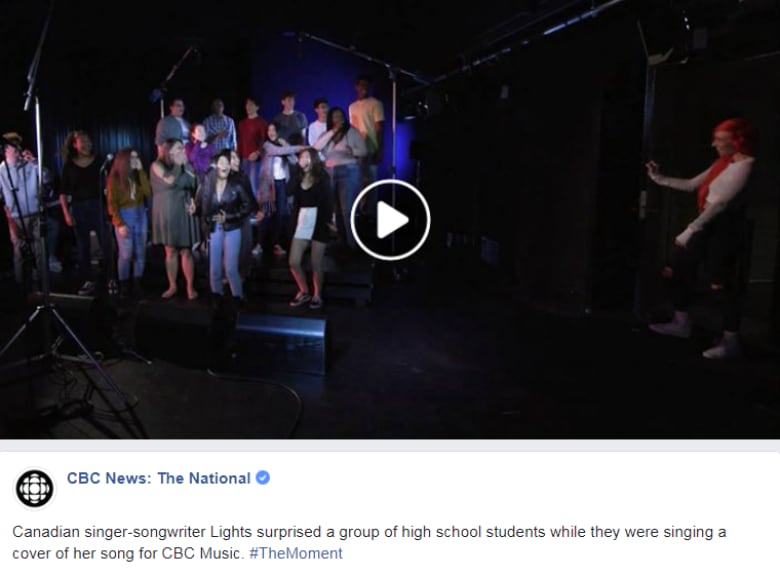 The Rolling Stones guitarist faced up to seven years in jail after a Toronto bust, but got off with a slap on the wrist — and an order to perform a free concert for the blind. What stands out most these days, however, is that the judge’s leniency flowed from the fact that Richards was wealthy and “didn’t need to steal” to support his habit.

A Toronto judge orders the Rolling Stones guitarist to play a free concert for the blind. 1:40