Police are dealing with a prairie fire of methamphetamine use which is rapidly overtaking fentanyl as the drug of choice for many.

But officers in Manitoba, Saskatchewan and Alberta say they’re worried about crystal meth as a narcotic of choice.

“The meth problem is happening across the Prairies. They’re seeing that opioid use is now being replaced with meth,” said Lethbridge police Chief Rob Davis.

“What I’m hearing anecdotally is so many people were dying on the fake fentanyl that there’s a perception out there that meth is safer — still dangerous, but safer.”

Meth, followed by heroin and fentanyl, is the top drug consumed at the supervised consumption site in Lethbridge. Davis recently watched people coming out of the site.

“There were some who looked like the Time-Life commercials for songs of the ’60s, where everybody’s doing their interpretive dancing, and then I’m watching people who just had that walk of rage, just stomping down the street with all that anger.”

Lethbridge police chief Rob Davis says there’s a perception among some people that meth is safer than fentanyl. (Lucie Edwardson/CBC)

The situation in Saskatoon is no better.

“It is an epidemic. I think we’ve reached that point,” said Det.-Sgt. Robin Wintermute from the police drug enforcement team.

“When I talked to my cohorts up in Prince Albert and down in Regina, they have the same things going on in their city as we are. It’s relatively cheap compared to cocaine and so it correlates with our business and residential break-ins, our petty thefts, our mail frauds, stolen autos, all that stuff.”

“The trend is certainly going upwards,” said Sgt. Guy Pilon, clandestine lab co-ordinator in Edmonton’s organized crime division. “There’s no lack of meth on the street. What we are seeing though is kind of an anomaly in that there is some really inexpensive meth that’s being sold out there, almost half the price of the normal stuff.”

Pilon said there’s also been an increase in the use of speedballs — users take fentanyl until about the time they are going to nod off and then use meth as a stimulant.

Many dealers are offering a wide range of drugs for customers instead of focusing on just one kind of narcotic, he added.

“Now the drug traffickers are selling more of a cornucopia of drugs to serve a greater client base.”

Winnipeg’s police Chief Danny Smyth has said the skyrocketing use of methamphetamine is creating a crisis for police, health-care services and addictions treatment centres. 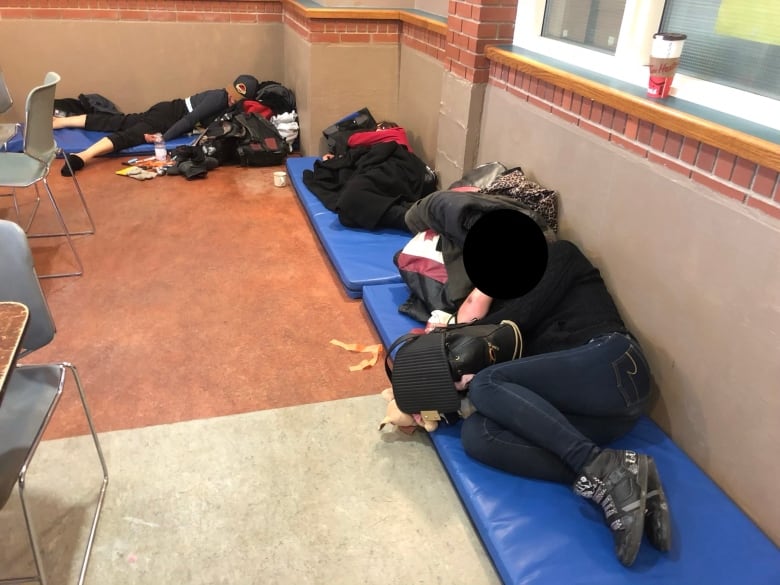 At a West Broadway drop-in centre in Winnipeg, many of the people who use the sleeping mats are addicted to meth. They stay up all night on the streets, then need a safe place to sleep during the day. (Holly Caruk/CBC)

Numbers from Winnipeg’s health authority show there has been a 1,200 per cent rise in people going to hospitals because of methamphetamine — 218 meth-related visits in April 2018 from 12 in April 2013.

Officer safety is also a concern. Where opioid users tend to be docile, those high on meth are more unpredictable.

“That’s the problem with it, right? Some of them have been up for days. It’s a devastating drug on the body and typically they’re not easy to deal with when they’re on the drug,” said Wintermute.

“They’ll use it all day long or over a period of days just to keep that high … then it’s a crash.

“They’ve got to feed that addiction.”