The first polls have closed in tonight’s midterm elections across the United States, as long lines and malfunctioning machines marred the first hours of voting in some precincts.

Voting finished in Indiana and Kentucky, as well as in most of Florida, Georgia and Virginia. And there are some key races to watch in those states, including in Georgia, where the governor’s race was among the nation’s most-watched midterm contests and generating heavy turnout. But some of the biggest delays at voting booths were also in Georgia.

You can also follow CBC News reporters covering the midterms across the U.S. through CBC News Instagram stories here.

Get the latest on who will take control of Congress 0:00

Today’s elections are the first opportunity for Americans to have a say about Donald Trump’s presidency. Trump has encouraged voters to see it as a referendum on his leadership, pointing proudly to the surging economy at recent rallies.

But Democrats are hoping to take control of at least the House of Representatives, giving them the opportunity to derail Trump’s legislative agenda, and give them power to expand investigations into his personal and professional conduct.

Polls in Virginia and Florida begin closing at 7 p.m. ET with the majority closed by 9 p.m. The final in-person voters will be in Alaska, finishing up at 1 a.m.

Health care and immigration were high on voters’ minds as they cast ballots in the midterm elections, according to a wide-ranging survey of the American electorate conducted by The Associated Press.

AP VoteCast also shows a majority of voters considered Trump a factor in their votes.

Trump speaks at a campaign rally at the Pensacola International Airport on Nov. 3 in Pensacola, Fla. (Mark Wallheiser/Getty Images)

A majority of the 113,000 voters surveyed said the country is headed in the wrong direction.

Long lines and malfunctioning machines marred the first hours of voting in some precincts, including in Georgia, where some voters reported waiting up to three hours to vote in the hotly contested gubernatorial election.

In the final days of the campaign, Trump amped up his rhetoric, peppering his rallies with improbable doomsday scenarios should the Democrats win control of one or both congressional bodies. One Trump campaign ad, playing on his fixation with a caravan of Central American migrants hundreds of kilometres away in Mexico, was deemed by a number of outlets to be too divisive — even racist — to continue airing. 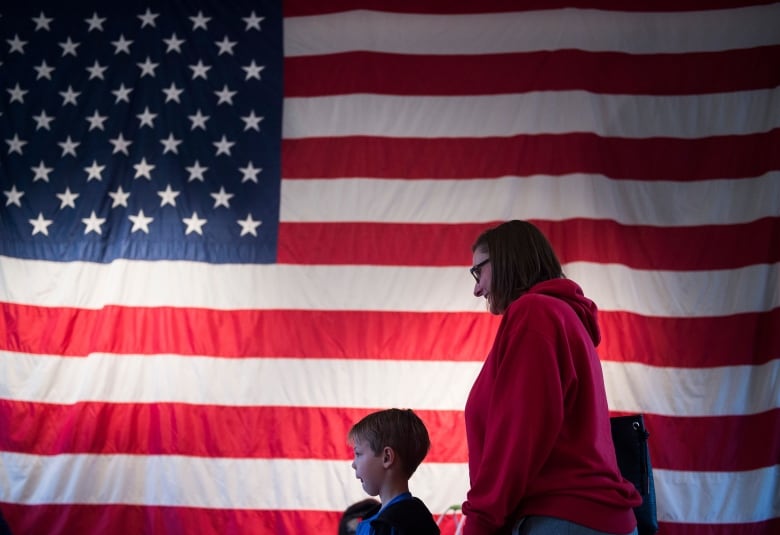 While political pundits may ultimately analyze Tuesday’s results as a test of Trump, many Americans will undoubtedly base their vote on factors other than their feelings about the president: economic indicators, health care, tax reform, immigration or just their overall comfort level with the direction the country is headed.

There are 35 Senate races being decided across 33 states. Republicans currently hold a 51-49 edge in Senate seats and are a strong favourite to retain control of the legislative body. Democrats and their independent colleagues have to defend 27 seats, including in states that went heavily for Trump in the presidential election.

All 435 House of Representative seats are in play. The current session comprises 235 Republicans, 193 Democrats and seven vacant seats (five of which were last held by Republicans). Democrats would need a swing of at least 23 votes to gain control of the House.