Now that Halloween is over and there are mounds of treats in many homes, the danger level for any household with pets is extremely high, says a Winnipeg veterinarian.

The days immediately following the night of trick-or-treating are a big concern, said Lianne Hawkes, veterinarian at the Pembina Veterinary Hospital.

“We see a lot of chocolate toxicity. That’s a big one,” she said. “Chocolate is toxic for dogs and, to a certain extent, cats, but it’s not as common in cats.”

The culprit is theobromine, a toxic compound naturally found in cacao beans. What causes a feeling of euphoria in humans can lead to vomiting, diarrhea and death in dogs.

It takes great amounts for an average-size human to be affected because we can easily metabolize it, but small doses are poisonous to dogs.

Their digestive systems process theobromine much more slowly, allowing toxic levels to build up in the heart, central nervous system and kidneys.

“Chocolate toxicity is very common, and we are expecting a large number [of cases] today,” said Hawkes. “Over the years that’s usually how it goes.”

A small amount will likely cause an upset stomach with vomiting or some diarrhea, while a little more can lead to cardiovascular problems like rapid breathing and increased heart rate as well as muscle tension and lack of co-ordination.

Too much can cause seizures and death.

“That’s probably not going to hurt the dog but it’s good that they’re checking,” she said, adding a phone call first is a good idea because it could save you a trip and some money.

Keep an eye on the animal just in case. Symptoms usually occur between four and 24 hours after a dog has eaten chocolate. 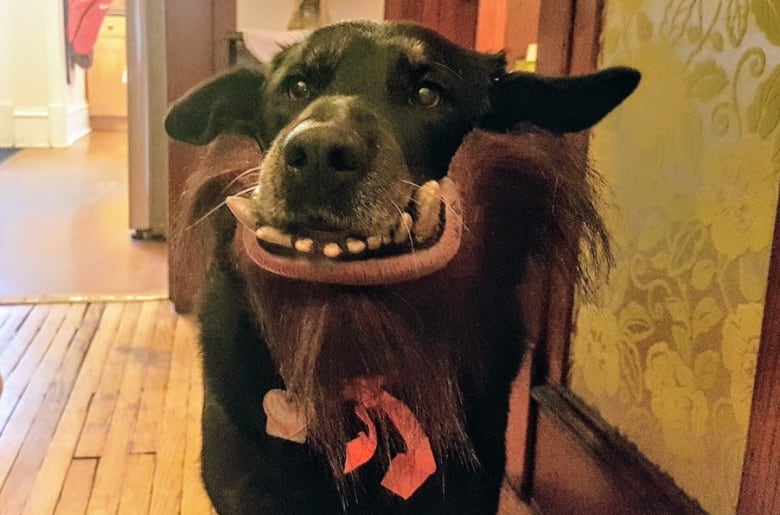 Dressing up your dog can be fun, but sharing your treats with it is definitely not a good idea. (Darren Bernhardt/CBC)

Chocolate isn’t the only risk, though. Candies, especially those labelled as sugar-free, are another concern.

“They often have a Xylitol sweetener in them and that can cause liver damage and can cause a dangerously low drop in blood sugar,” said Hawkes.

Raisins, too, are a big no-no, although the miniature boxes of those seem to have dropped off in popularity as treats.

And then there’s simply the packaging of the products themselves. Dogs aren’t likely to unwrap a chocolate bar, so the wrappers will be devoured as well, or they might inadvertently swallow packaging while trying to lick it clean.

“Packaging in the stomach or intestines can cause an obstruction and in rare cases, they might need surgery to have it removed,” said Hawkes.