Republican Brian Kemp resigned Thursday as Georgia’s secretary of state, a day after his campaign said he’s captured enough votes to become governor despite his rival’s refusal to concede.

Stacey Abrams’s campaign immediately responded by refusing to accept Kemp’s declaration of victory in the race and demanding that state officials “count every single vote.”

As the state’s top election official, Kemp oversaw the race, a marquee contest in the nation’s midterms. His resignation Thursday morning came as a hearing began for a lawsuit in which five voters asked that he be barred from exercising his duties in any future management of his own election tally.

It is grossly unfair to any fox in America to compare Brian Kemp with a fox guarding the hen house. It is much worse in Georgia.– Tom Perez, Democratic National Committee chair

Abrams’s campaign had repeatedly accused Kemp of improperly using his post as secretary of state and had been calling for him to step down for months, saying his continuation in the job was a conflict of interest. But Kemp made clear that he wasn’t stepping down in response to that criticism, but to start on his transition to the governor’s office.

His resignation took effect just before noon Thursday. He said an interim secretary of state has been appointed to oversee the rest of the vote count.

The Associated Press has not called the election.

Shortly after Kemp’s announcement, Abrams’s campaign and its legal team held a news conference to announce that they would continue to fight to get all votes counted. Her lawyers insisted that enough votes remained uncounted to affect the outcome of the election.

The lawyers said they planned to file a lawsuit Thursday against officials in Dougherty County, where they said absentee ballots were delayed because of Hurricane Michael, which devastated parts of south Georgia.

They also said they ask the court to ensure those votes are counted, and to require that elections officials preserve all potential evidence about the vote count.

“How can anybody claim a victory when there are enough votes that have not been counted that could cause a runoff here?” Attorney John Chandler asked. “We will litigate until we have determined that every person’s vote has been counted.”

Previously, Abrams had pointed to ballots that had yet to be counted in metro Atlanta counties where she won a large share of the vote. Her campaign has said she must pick up about 15,000 votes to secure a runoff in December.

Kemp said Abrams is using “old math.” Without providing specifics, he said in a WSB Radio interview that the number “is actually more like 30,000 votes.”

At a news conference with Republican Gov. Nathan Deal late Thursday morning, Kemp declared that there are only about 20,000 provisional ballots that have not yet been counted in the race. He did not offer any details, but in response to a question said he would ask about releasing county-by-county results.

In fact, Kemp’s office did release to the AP a county-level breakdown about the same time he started speaking in Deal’s office Thursday. The office had not immediately shared that requested information the day before, however, even as Kemp’s campaign cited the statewide estimate as his justification for declaring victory.

The standoff continued to attract attention around the country, with the head of the Democratic National Committee applauding Abrams for pressing on and blasting Kemp as untrustworthy.

“It is grossly unfair to any fox in America to compare Brian Kemp with a fox guarding the hen house. It is much worse in Georgia,” DNC Chairman Tom Perez said in Washington. “I don’t think that race is over. Every vote must be counted, and the integrity of that election is at stake.”

Late Wednesday afternoon — after a day of the campaigns, news outlets and partisan observers scrambling for information about outstanding votes across Georgia’s 159 counties — Kemp aide Ryan Mahoney told reporters on a conference call, “We are declaring victory.” Campaign official Austin Chambers added: “The message here is pretty simple: This election is over, and the results are clear.”

If a runoff is necessary, it will take place Dec. 4, extending Abrams’s bid to become the first black woman elected governor in American history, while Kemp looks to maintain the GOP’s domination in a state where Democrats haven’t won a governor’s race since 1998.

Last month, the Associated Press reported more than 53,000 voter applications were on hold with Kemp’s office ahead of the election. Nearly 70 per cent of those registrations were from black applicants.

Kemp said he was merely following state law. He said the Georgians on the “pending” list could still vote by bringing a proper ID that matches their registration information, to resolve the issue in person.

Many of the 53,000 wound up on the list for failing Georgia’s “exact match” verification process. A judge issued a restraining order preventing Kemp’s office from throwing out absentee ballots where a resident’s signature didn’t exactly match the signature on their voter registration card.

Adding to the concerns leading up to the midterms is that Georgia is one of just a handful of states that do no use a verifiable paper backup with their electronic voting system. Georgia’s direct-recording electronic (DRE) voting machines have drawn criticism from various advocacy groups and federal agencies, including U.S. Department of Homeland Security officials, who called the systems a “national security concern.”

Voting rights groups and individual voters sued Georgia officials in 2017, alleging that the electronic machines are highly vulnerable to hacking and cannot be audited or verified. A judge in September said there wasn’t enough time to agree to their request to require paper ballots for the midterm vote, although the suit was allowed to proceed. 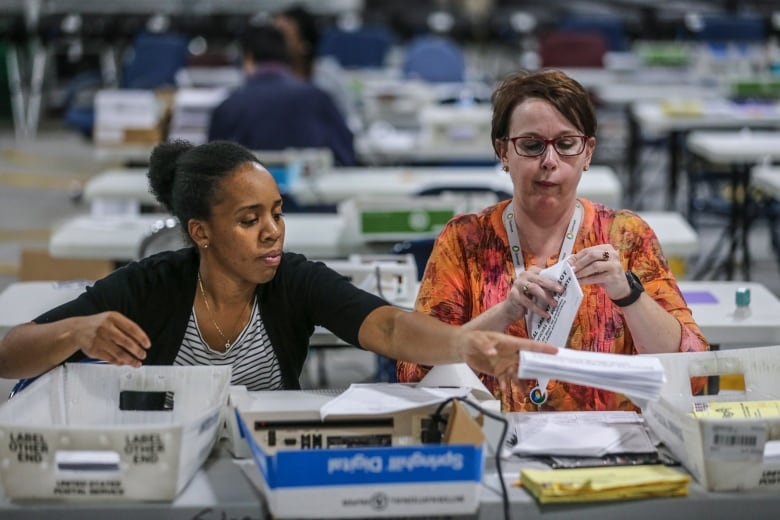 From left, election workers Shantell Black and Elections Deputy Director Kristi Royston open and scan absentee ballots on Nov. 7 in Lawrenceville, Ga. There were serious questions raised ahead of the contest over Kemp’s apparent conflict of interest, voter registrations and the vote-counting technology used. (John Spink/Atlanta Journal-Constitution via AP)

The lawsuit at issue Thursday morning in an Atlanta federal court came from voters who sued Kemp on Election Day alleging that his presiding over an election in which he is a candidate “violates a basic notion of fairness.” The plaintiffs asked the court to block Kemp from having anything more to do with managing his election. The hearing ended shortly after it began with the announcement of Kemp’s resignation.

With reported votes exceeding 3.9 million — almost 95 per cent of Georgia’s 2016 presidential turnout — Kemp has just more than 50 per cent.

In 2016, with a slightly larger electorate, there were 16,739 provisional ballots. Of those, 7,592 were counted. State and campaign officials said they expected a much higher proportion to be counted this year.

It’s not immediately clear what Kemp’s practical role was in the election tally. Local officials are responsible for counting the votes, including provisional ballots. County officials have until next Tuesday to certify their results and send them to Kemp’s office. Statewide certification must come by Nov. 20.