The first legal recreational cannabis has officially been sold in Canada.

In Newfoundland and parts of Labrador, which has a separate timezone from the rest of Canada, midnight comes earlier, and people were ready and waiting for marijuana to be sold to them over the counter.

The first sales went to Ian Power and Nikki Rose, who lined up outside awaiting the opening of the Tweed retail location on Water Street in downtown St. John’s.

The lineup at the Tweed store started at around 8 p.m. NT, and steadily grew as the time ticked down to 12 a.m.

“It’s been my dream to be the first person to buy the first legal gram of cannabis in Canada, and here I finally am,” Power said.

Power says he hopes the stereotype of a ‘stupid stoner’ is gone in the near future, following the legalization of cannabis in Canada. (Ted Dillon/CBC)

Marijuana became legal across Canada as of Oct. 17, months later than the original target date set out by the federal government. The Senate passed the bill earlier this year, making Canada only the second country to legalize cannabis.

Tweed opened its doors just before midnight so customers could start filing in, amid a crowd of media, to line up to buy their first legal bud.

“When’s the last time you bought a gram and got a receipt for it? Never happened,” said Canopy CEO Bruce Linton to his first customers, Power and Rose, as they stood in the front of the line for sales to officially start. 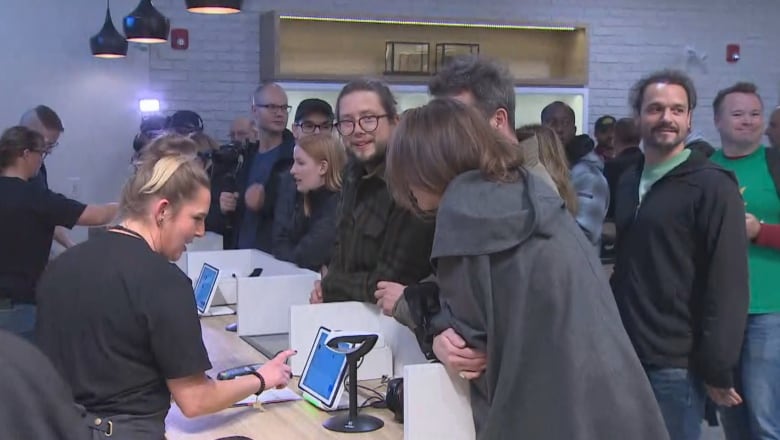 A crowd of customers and media at the counter of the Tweed store just after midnight on Oct. 17, as marijuana became legal in Canada. (Ted Dillon/CBC)

“For me it just proves that Canadians are open to this, they’re ready for this. It’s not like, ‘Oh my God look at that sketchy character,'” Linton told CBC News after ringing in the first sale.

Linton added that at the company’s headquarters in Smiths Falls, Ont., he was approached by a 102-year-old woman who was curious about cannabis products. 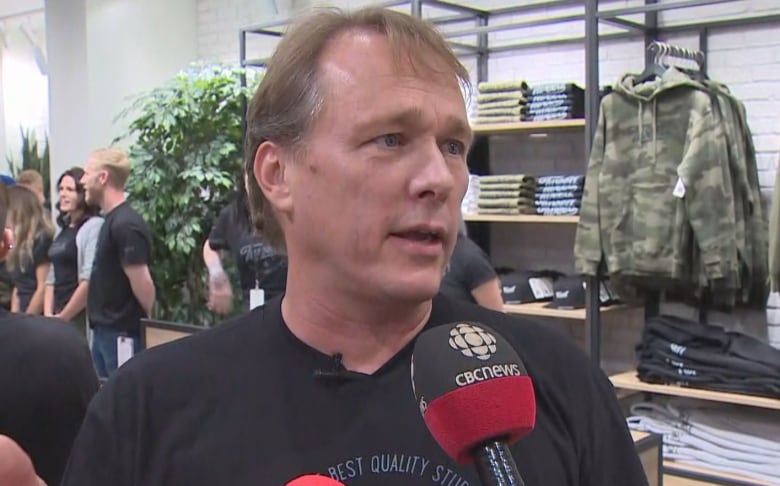 “Everybody wants to understand it,” Linton said. “They don’t like ignoring it.”

Meanwhile, Power, who said he has advocated for cannabis users and patients for years, said he’s hopeful legalization will help eliminate what he calls stigma around the substance.

“I think the social stigma of the ‘stupid stoner’ or the criminal element for using cannabis, a benign substance, as my choice of medicine or recreation, I think that’s gonna change,” Power said.

“Cannabis is in all walks of life. People who are unemployed, to the lawyers and judges in the country, so why not?” 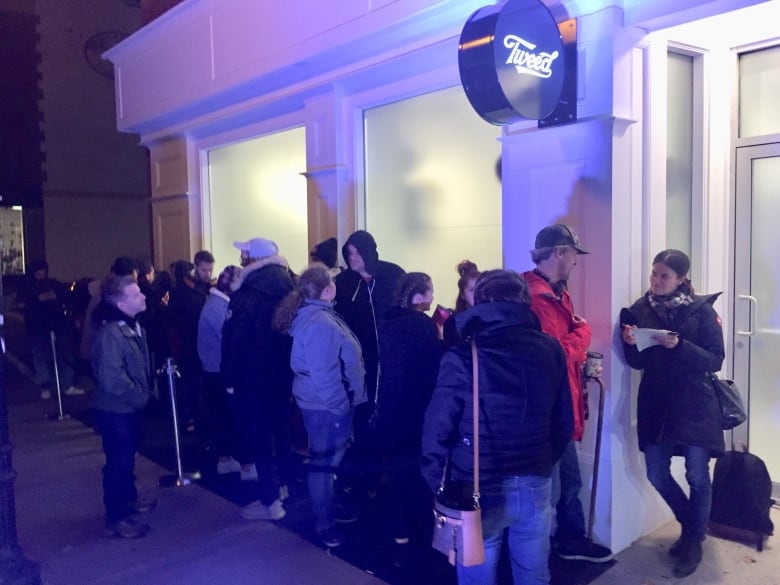 The line of people outside Tweed grew leading up to midnight, when N.L. started legally selling recreational marijuana. (Zach Goudie/CBC)

Last week, the Newfoundland and Labrador government announced that as of 12:01 a.m., marijuana would be able to be sold.

The NLC, the Crown regulatory agency, then said retailers would be allowed to operate from 9 a.m. until 2 a.m., meaning there’s a two-hour window at the very start of Oct. 17 when marijuana can be purchased.

If you think the lineup inside was wild…have a look at this! Hundreds waiting outside Tweed on Water Street to buy legal cannabis. Big crowd down the street at The Natural Vibe as well.<a href=”https://twitter.com/CBCNL?ref_src=twsrc%5Etfw”>@CBCNL</a> <a href=”https://t.co/HxdUZidLq1″>pic.twitter.com/HxdUZidLq1</a>

Linton nearly missed the first legal sale due to high winds Tuesday that delayed his flight, but he was able to land to be on hand to sell the country’s first legal weed.

There are a number of other retailers, like THC Distribution in Portugal Cove-St. Philip’s, just outside of St. John’s, where owners are also opening for midnight sales.

Owner Thomas H. Clarke said he’s “living the dream” opening a pot store at home, but worries that he might be out of product by Friday. 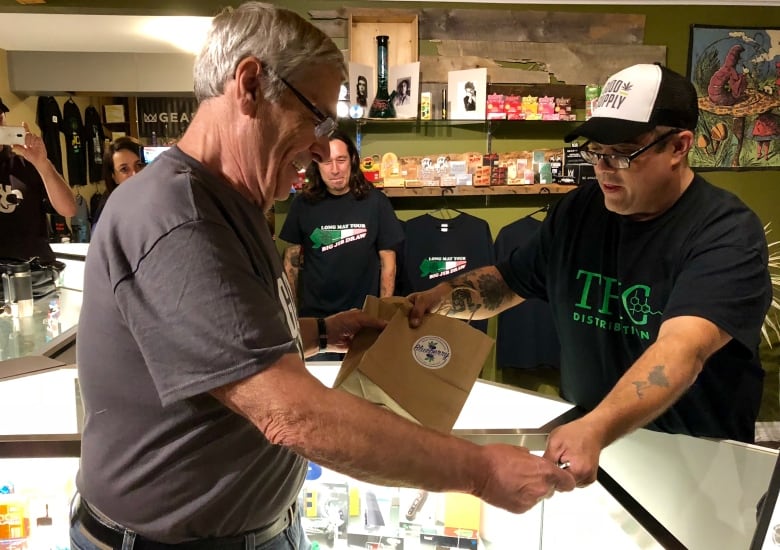 His first customer was his father, Don, while a crowd of about 100 people waited outside in line on a chilly and windy night to make their first legal purchases.

He said it feels “unbelievable” to be able to purchase marijuana legally, after being a user for 50 years. 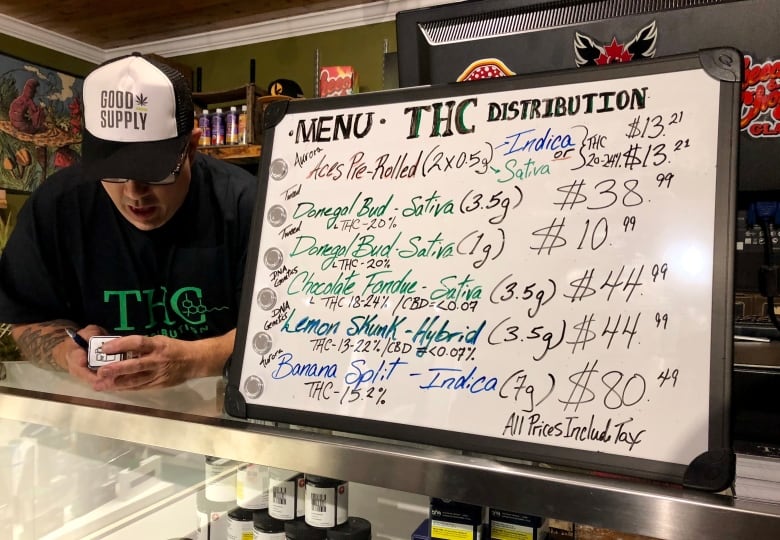 Thomas H. Clarke gets his menu and pricing list ready ahead of his official opening of THC Distribution in Portugal Cove-St. Philip’s, as cannabis becomes officially legal in Canada. (Jeremy Eaton/CBC)

“It’s been discussed at length — to overkill.”

While the supply may be limited when sales start up, Clarke said there will be a wider selection available as time passes and more items hit the market.

Other shops also had lines outside their doors once midnight hit, with people scurrying to get in and make their legal purchases of marijuana before the mandatory closure at 2 a.m.

Each province sets its own marijuana regulations, including at what age people can purchase it, locations, quantity limits and smoking locations.