When the results of today’s U.S. midterm elections are tallied, people will have a clearer sense of how the American people really feel about the current administration. Or at least, how they feel based on the information they’ve read leading up to the election — not all of which was factual.

Alas, it’s not just the temperature of the U.S. political climate that will be gauged; so too will the impact and reach of online misinformation.

All the major social networks have made attempts to clamp down on fake news, but the trickery has only grown more insidious and pervasive, with new derivatives of fake news, such as fake fact-checkers.

Indeed, it would appear that just as we outsmarted fake news, those pushing misinformation have outsmarted our outsmarting.

Jane Lytvynenko tracks fake news and viral hoaxes at Buzzfeed. She says misinformation travels far on social media “and if the headlines are politicized, they also tend to be divisive.”

People packed a Houston sports arena on Oct. 22 for a Ted Cruz rally featuring an appearance by President Donald Trump. The Texas midterm race between Cruz and Beto O’Rourke has become focused on getting the vote out. (Jason Burles/CBC)

As an example, one recent conspiracy theory accusing mail bomb suspect Cesar Sayoc of being a “false flag” operative has almost 80,000 shares on Facebook. For comparison’s sake, the most shared article from the New York Times during the same period received 50,000 shares.

And it’s not just fabricated headlines that readers need to be wary of.

Lytvynenko explains that the majority of misinformation we see online is not strictly speaking fake news, which is defined as a piece of content that is completely fabricated and financially motivated. “Instead what we see is hyperpartisanship — websites and blogs spinning real facts past the point of recognition.”

According to the Poynter Institute for Media Studies, a growing number of fake fact-checkers are making it harder than ever for consumers to differentiate what is real from what is bogus.

Poynter cites the example of the pseudo-news site The California Republican, run by the campaign committee to re-elect U.S. Representative Devin Nunes, which published what they called a “fact-check” of an opinion article opposing Nunes. In other words, they didn’t like what had been written about him, so they wrote their own rebuttal, framing it as a fact-check.

And fake fact-checkers are just one example of the proliferation of fake news derivatives; now, even legit fact-checking efforts might be giving fuel to the false narratives.

According to danah boyd (who spells her name lower case), the founder and president of the research institute Data & Society, the media are being played by those wishing to spread false news.

She states that media manipulators have developed a predictable — but successful —  strategy in which, first, they create spectacle, using social media to get news media coverage, which in turn drives new audiences to the story.

Case in point, according to a recent study by Media Matters for America, over the past three weeks, leading newspapers, including the New York Times and the Washington Post, have produced more than a hundred news stories referring to the migrant caravan, which the report refers to as President Trump’s “phony crisis,” claiming he is “using his bully pulpit to move it to the top of the media agenda.”

So what are we to do?

According to Lytvynenko, “one key thing reporters have to do is think about what they amplify and what words they use to do it.” 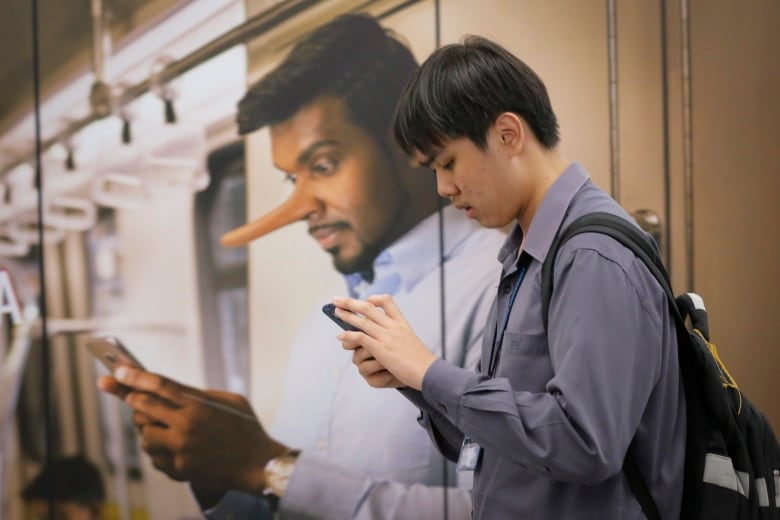 A commuter walks past an advertisement last April discouraging the dissemination of fake news, at a train station in Kuala Lumpur. (Vincent Thian/Associated Press)

For the audience, she recommends following legitimate news outlets and being careful about what you share. As well, she cautions, getting news from social media is not ideal.

“If a headline is meant to create outrage, look into it further before blasting it out to your friends on social.”

To that end, it would seem, the best thing any of us can do is slow down, instead of always racing to keep up with the pace of our constantly updating feeds. After all, research has shown that six out of 10 of us will share an article just based on its title, which means in all of those cases, we’re prone to fall for a hoax, because we’re not reading closely enough … if at all.

And yes, we’re just as prone to this hasty headline-sharing here in Canada.

As Radio Canada’s Jeff Yates reported, a fake news article accusing NDP leader Jagmeet Singh of being wanted for terrorism in 15 countries was shared more than 5,500 times, despite the fact that if you were to click on the article, there was nothing in the text to support the claim in the headline.

Alas, the most troubling — and complicated — part about fake news in all of its forms is that it has repercussions on the real world. In the lead-up to the congressional vote south of the border, it has seemed that any version of the “truth” can be found online. But despite the proliferation of misinformation online, those being voted in are real candidates with real views.