Attacks on the media are a threat to democracy, Trudeau says

By: News
In: News, News/Politics
With: 0 Comments


Prime Minister Justin Trudeau told a press freedom event in Paris Sunday that one of the bulwarks protecting democratic governments from being undermined is also an institution under stress — a free-thinking, robust media.

“If a democracy is to function you need an educated populace, and you need to have an informed populace, ready to make judicious decisions about who to grant power to and when to take it away,” Trudeau said.

“When citizens cannot have rigorous analysis of the exercise of the power that is in their name and they have granted, the rest of the foundation of our democracies start to erode at the same time as cynicism arises.”

The press freedom advocacy organization Reporters Without Borders has developed a six-page international declaration on information and democracy to establish basic principles for the “common good of mankind.” The organization hosted a small event on the sidelines of the Paris Peace Forum late Sunday afternoon where five presidents and prime ministers, including Trudeau, offered endorsements for this declaration.

The Paris Peace Forum, intended to be an annual gathering of political, business and civil society leaders to explore peaceful solutions to the world’s problems, was hosted by French President Emmanuel Macron to coincide with this weekend’s events marking the centenary of the armistice agreement that ended the First World War.

When it was his turn to speak, Trudeau acknowledged that throughout history the powerful have tried to silence their critics.

“There have always been tensions between those who would speak truth to power and those who like having their power, thank you very much, and don’t necessarily want to see it frittered away,” he said.

“But we are now in a phase where that capacity to speak truth to power, the very capacity for a citizen to engage with truth, is under attack. And not just by the powerful, but by those who would see our institutions themselves weakened.”

It wasn’t clear exactly who Trudeau was referring to with this remark. But in recent elections, efforts to spread misinformation to voters, particularly on social media, have been blamed on Russian President Vladimir Putin’s government, which is said to want to destabilize other governments to increase its own influence around the world.

Immediately before attending this press freedom event, Trudeau was in the audience for the opening of the Paris Peace Forum as Macron, German Chancellor Angela Merkel and United Nations Secretary General Antonio Guterres spoke. Seated to his right was Russian President Vladimir Putin.

When the pair was spotted chatting together briefly before the event started (for roughly 30 seconds), journalists covering the prime minister’s trip asked his office for information on what the pair discussed.

Prime Minister Justin Trudeau was seated beside Russian President Vladimir Putin for the opening session at the Paris Peace Forum Sunday. The pair spoke for about 30 seconds before the speeches began. (Adrian Wyld/Canadian Press)

Relations between Canada and Russia have been tense since before Trudeau became prime minister. Foreign Affairs Minister Chrystia Freeland has been banned from the country.

A spokesperson replied that Trudeau “acknowledged the Russian people’s extraordinary sacrifices through the two World Wars,” and that “therefore it’s important to have Russian representation here to talk about peace.”

Freeland spoke about the importance of a free press during an event hosted by CBC’s The National last Thursday evening, telling the audience both she and the prime minister had been thinking a lot about the issue lately.

Anxiety, cynicism on the rise

Trudeau, addressing the audience at the press freedom event without a prepared text, also talked about the risk if too many citizens become too cynical about public institutions.

“Attacks on the media are not just about getting your preferred political candidate elected,” he said. “They’re about increasing the level of cynicism that citizens have toward all authorities, toward all of the institutions that are there to protect us as citizens.”

Citizens are feeling “very real anxiety,” Trudeau said, because their jobs are transforming as globalization increases competition around the world. When that anxiety is exacerbated, it undermines trust in institutions and increases cynicism.

“One of the bulwarks against that, and one of the institutions that is most under stress right now, is a free-thinking, independent, rigorous, robust, respected media,” the prime minister said. 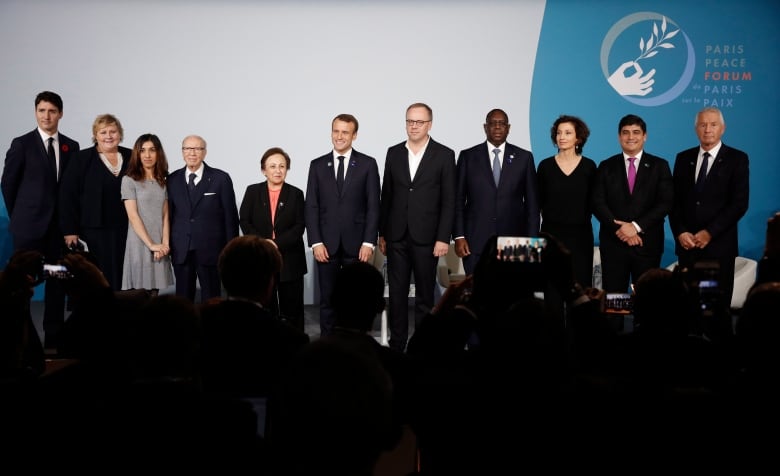 Trudeau didn’t mention Donald Trump by name in his remarks, but the American president’s increasing hostility toward the press that covers him is becoming more and more apparent, as he refers to critical reports as “fake news” and insults journalists as they try to do their job covering his administration.

Trump declined to attend the peace forum Sunday afternoon, speaking instead at a commemorative service at an American military cemetery near Paris.

“When people feel their institutions cannot protect them, they look for easy answers,” Trudeau said, “in populism, in nationalism, in closing borders, in shutting down trade, in xenophobia.”

Trump and Trudeau had a chance to speak Saturday night at a dinner hosted by Macron. A Canadian official speaking on background told reporters they had a “good interaction,” although no specific topics were offered. 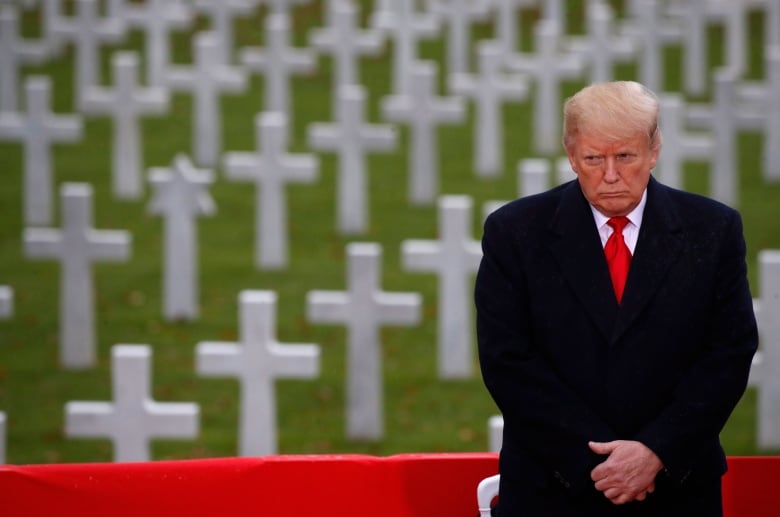 President Donald Trump stands in front of headstones during a commemoration Sunday at the Suresnes American Cemetery near Paris. Trump was attending centennial commemorations in Paris this weekend to mark the Armistice that ended the First World War. (Jacquelyn Martin/Associated Press)

Trudeau mentioned the recent killing of Saudi dissident journalist Jamal Khashoggi and the imprisonment of two Reuters journalists who reported on the killing of the Rohingya minority in Myanmar as examples of troubling cases where Canada feels compelled to speak out.

Myanmar is a member of the Association of South East Asian Nations (ASEAN), which is holding its annual summit this week in Singapore. Canada is a “dialogue partner” of the ASEAN group, and Trudeau is scheduled to leave for Singapore Monday afternoon.