By: News
In: News, News/Canada/Thunder Bay
With: 0 Comments

Fobister’s family announced Friday morning they’re calling on Ontario’s chief coroner to call “an inquiry into the cause of his illness and death.”

Fobister, who also served as the Grand Chief of Grand Council Treaty 3, and who was celebrated for being an advocate and environmentalist, died Oct. 11 at the age of 66. His family said he died after “a protracted battle with a degenerative neurological disease in his body.”

“Our beloved Steve passed away without ever getting the closure of having a government minister look him in the eye and admit that he was poisoned by mercury,” a statement addressed to Prime Minister Justin Trudeau and Ontario Health Minister Christine Elliott said.  “Instead he was forced to fight for four decades for mercury justice in the face of denial, delay and discrimination.”

The family said it wants governments to speak “the truth.”

Fobister was outspoken about the mercury contamination of the water that has devastated Grassy Narrows and Wabaseemoong, after Reed Paper in Dryden, Ont., which is upstream of the First Nations, dumped contaminated effluent into the river in the 1960s and early 1970s.

During his life, he advocated for remediation of the river, a specialized treatment facility in Grassy Narrows as well as better compensation for people affected by the toxic chemical.

The family’s statement also called on the governments to “admit at long last that Steve Fobister Sr. lived with mercury poisoning and died from mercury poisoning,” and “commit to fairly compensate all Grassy Narrows people for the ongoing mercury crisis.”

Similar calls have been raised by federal and provincial New Democrats in Parliament and Queen’s Park, respectively, over the past week.

Neither senior level of government, the companies involved in the water’s contamination nor the Mercury Disability Board — which processes claims for mercury-related disability pensions — have ever admitted that anyone in Grassy Narrows has been poisoned, only that some show symptoms of Minamata Disease.

The compensation board has also been criticized for denying the majority of applications for compensation; based on 2014 numbers, nearly 75 per cent of the claims sent to the board were rejected.

“Steve Fobister leaves behind a legacy of powerful advocacy and courage,” said Ontario Health Minister Christine Elliott in a statement to CBC News, adding that eligibility for mercury disability benefits is determined by the compensation board.

“Ontario is committed to the remediation of the English-Wabigoon River system and continue to work with Indigenous communities to identify contaminated sites and develop and implement a remediation plan.”

A statement to CBC News from federal Indigenous Services Minister Jane Philpott called Fobister “a strong and passionate voice for the Grassy Narrows community and the challenges that they have faced for too long.”

“It is clear that community members have suffered for generations — suffering that continues to this day.”

Both statements also repeated promises that respective senior levels of government have pledged, including the Ontario PCs’ announcement that they will index mercury compensation payments to inflation and retroactively pay survivors and the federal Liberals’ promise to fund a mercury treatment centre in Grassy Narrows.

The province also said that, as of July 1, people who receive mercury disability benefits also qualify for the Ontario Disability Support Program. 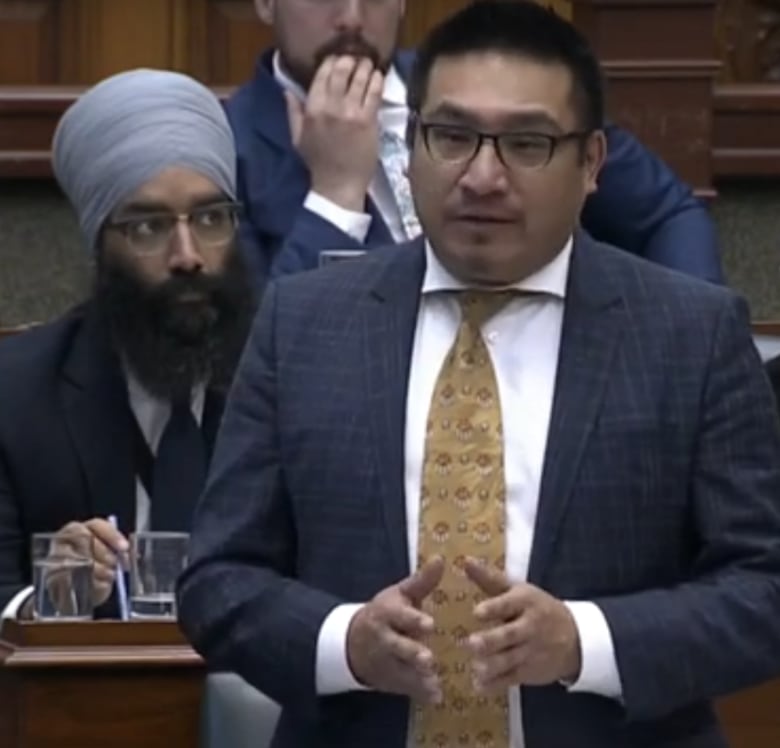 Sol Mamakwa is the MPP for Kiiwetinoong in northwestern Ontario. He again pressed the provincial government on Thursday to say Steve Fobister had been poisoned by mercury. (Youtube)

Kiiwetinoong MPP Sol Mamakwa repeated the family’s call at Queen’s Park on Thursday, adding that he also raised the question when he addressed the legislature shortly after Fobister’s death.

“What I asked went unanswered.”

Government House Leader Todd Smith replied that the government is “taking the situation in Grassy Narrows very seriously,” and called the mercury contamination “an historic tragedy.”

When raising the issue of Fobister’s death and Grassy Narrows in question period on Wednesday, Timmins-James Bay MP Charlie Angus asked of Trudeau “what’s it going to take for this Prime Minister to admit that people are still being poisoned?”

A vigil for Steve Fobister Sr. was also held Thursday evening in front of Queen’s Park in Toronto.

2018-10-27
Previous Post: Swoop to resume flights to U.S. after receiving final operating approval
Next Post: What’s the dirtiest surface on an airplane? The result may surprise you